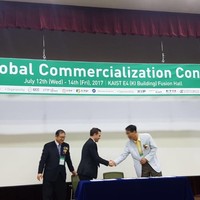 Between July 12 and 14, the World Trade Center São Paulo Business Club was invited to participate and lecture in the GCC KAIST CONFERENCE AND WORKSHOP. The meeting was intended to bring together all the companies that will be partners of KAIST GCC around the globe, which presented their strategies and plans for the future cooperation. Representing Brazil, the CEO of the WTC São Paulo Business Club, Mr. Sérgio Frota, did a presentation about the current Brazilian scenario.

KAIST (Korea Advanced Institute of Science and Technology), located in Daejeon, a region considered the Asian Silicon Valley, is a university founded in 1971 focused on the research and development of human resources in science and technology. According to Reuters, it is considered one of the most respected science and technology institutes in the world, occupying the 6th position of the 2016 ranking, in addition to being seen as the most innovative university in Asia. The institution aims to develop science and technology areas globally by providing the most effective program in the world, integrated by various phases of marketing processes, as well as exploiting market demand, technology transfer, marketing, Education and consulting.

Regarding the bilateral relationship between South Korea and Brazil, cooperation agreements have been worked in the areas of research and development, technology, education, urban mobility, health and environmental management. The proximity between the two countries has grown in recent years, with Brazil being the country’s biggest trading partner in Latin America. Investments between them can be seen both in academic cooperation, since South Korea was the first East Asian country to join the «Borderless Program», and in the electronic, automotive, oil and steel sector receiving South Koreans investments in Brazil, demonstrating the great potential for cooperation in high-tech sectors.

The WTC Business Club São Paulo, having as one of its main missions the fostering of international business, will work as an arm of KAIST GCC in Latin America, promoting solutions and opening new markets.

«The partnership between WTC and KAIST GCC will bring to our country and companies R & D solutions for several economy sectors that need to evolve. At several times, Brazil does not have technology and investments enough, and the partnership with South Korea, a reference country in technology and sustainable solutions, will make our country more competitive in the international market, » said WTC Business Club CEO São Paulo, Mr. Sérgio Frota.