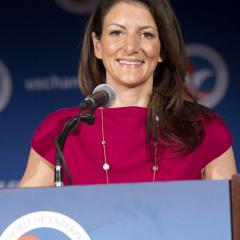 I know you´re watching our absurd reality show of a presidential season!  I can assure you that what appears concerning from afar is much more troubling up close.

Indeed, we are in the middle of the most surprising and perplexing presidential campaign in modern U.S. history.

As Tom Donohue, President and CEO of the U.S. Chamber, stated in the Chamber´s annual address on the State of American business, on one side we have a candidate promising to double down on the current administration´s policies.

An on the other side there´s an ominous voice who´s talking about walling America off from people and trade and is attaching whole groups of people based not on their conduct but on their ethnicity or religion, Mexico obviously being among his chief targets.

This is morally and politically wrong.